Based on: Molière’s Tartuffe

The young artist whom Bitef wishes to promote in an international context this year is Belgrade director Igor Vuk Torbica. His staging of Molière’s Tartuffe is, actually, an example of “rewriting“ – an act of writing a new text based on the motifs and with characters and situations from an original classic play. Strictly speaking, his performance cannot be called immersive, although it does radically causes the fourth wall to crack. A spatial closeness between the audience and the stage, together with Dorina, a character in the role of a narrator and intermediary, cause the audience to “blend“ into the dramatic fiction and turn into a passive accomplice in the collapse of one family. Although this family is not completely innocent, it still is, in the first place, a victim of manipulation by a Mephistopheles-like Tartuffe (wonderfully interpreted by Saša Torlaković), shown here as a representative of an authoritarian regime. 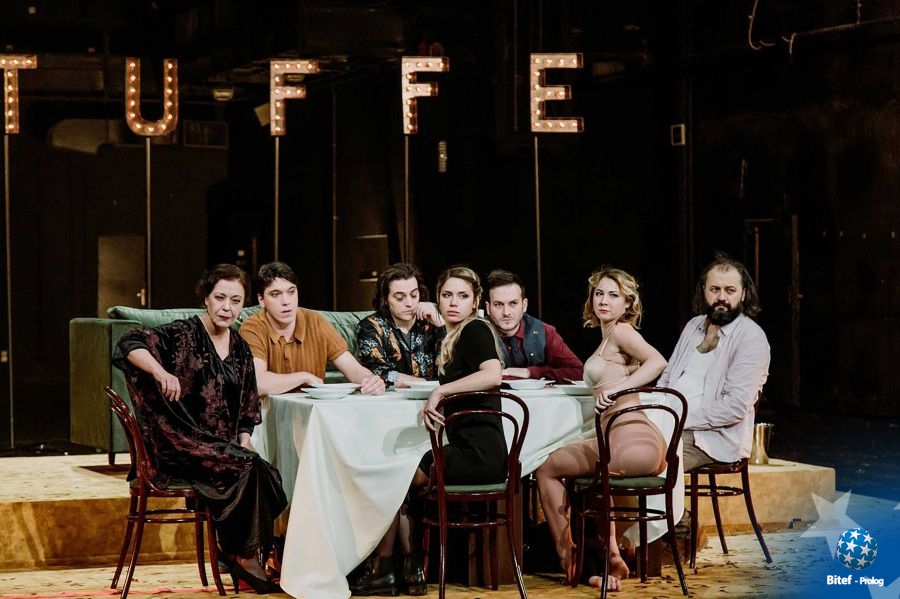 Igor Vuk Torbica’s author project, Tartuffe, is created as a present-day Serbian story about social hypocrisy and lies that are set within a complex family story. Where did this family end up by giving their full allegiance to the leader who resorts to demagogy in order to blackmail them into doing nothing but remaining obedient citizens, how easily people change opinions, and how relevant Moliere’s play still is, all of that is told through the two-hours’ play by the magnificent actors who introduced their personal experience into the original play and, together with the director, created a new Tartuffe.

MOLIÈRE, the full name Jean-Baptiste Poquelin (1622 - 1673) was a French actor, playwright, and a director of theatre in the period of Classicism. He was born in the family of a wealthy royal upholsterer, graduated in law but decided to give up that career and to turn to acting. In Paris, he founded a theatre troupe “L'Illustre Theatre” for which he adapted Italian comedies and spent twelve years toured French province. He wrote a number of plays in prose and in verse. He ridiculed the society, class prejudices, vile nobility, and greedy bourgeoise, but also didn’t refrain from criticizing hypocrisy among Catholic priests. He developed Italian comedy of intrigue into social comedy and the comedy of manners with tragicomic background, where the comical element reaches the level of tragic. He is influenced by commedia erudite and the commedia dell’arte, but also the influence of ancient Roman comedy writers (Plautus). The play The Affected Young Ladies brought him a huge success and general fame and recognition. That triumph meant the true beginning of Molière’s artistic glory. He and the troupe came under the direct protection of the court and became the official author of court entertainments.

The play Tartuffe was written in 1664.

IGOR VUK TORBICA was born in Drvar (Bosnia and Hercegovina), spent his childhood in Rovinj (Croatia), graduated from High School of Applied Arts and Design in Pula, and in Directing from the Faculty of Drama Arts in Belgrade, under the mentorship of professor Alisa Stojanović. His third-year exam performance, The Deceased by Branislav Nušić, won the Studio Fest, it was named the best performance at Nušićevi Dani festival in Smederevo, and entered the repertory of Yugoslav Drama Theatre. His staging of Kleist’s The Broken Jug in the same theatre, won in 2016 five awards at the Days of Comedy in Jagodina, three plus one accolade at the International Small Scenes Theatre Festival Rijeka, and three awards at the Days of Satire in Zagreb. Igor Vuk Torbica went on to direct The Bereaved Family by Branislav Nušić in Kranj (Slovenia), Don Juan in Zrenjanin, Hinkemann in Zagreb Youth Theatre, which won the Best Performance award at the Yugoslav Theatre Festival “Bez povoda” in Užice, the “Ardalion” award, the Best Performance award at Gavella Evenings Festival in Zagreb. He directed Tales from the Vienna Woods in theatre Gavella in Zagreb, and in 2017, his performance The Power of Darkness by Leo Tolstoy premiered in the National Theatre Belgrade, In Serbian National Theatre in Novi Sad, he directed Blood Wedding by Lorca, and then his author project Tartuffe (co-production between the National Theatre Sombor and Serbian National Theatre Novi Sad).

VLADIMIR PEJKOVIĆ (1976, Serbia) - besides chamber music, he also writes music for theatre and film. He has composed for over one hundred theatre performances of various genres, and for several fiction films. He composed music for the official screening of the restored version of the first Serbian fiction film made in 1910, hiphopera Land of Happiness, and was a co-author of the project Tesla - Total Reflection. He also works in theatre as music supervisor, sound designer and a performer (piano, guitar, bass guitar, live electronics), and cooperates with music bands. He has participated at institutional and independent productions throughout Serbia, and a couple of times in Italy and Slovenia. His work has been awarded.

The character of Tartuffe, as played by Saša Torlaković, is horrifyingly contemporary, daily, not at all demonic, but utterly benevolent, sweet-spoken, almost personally touched by his own kindness and deeply convinced in his own ethical exquisiteness. Simultaneously, he is invasive and violently penetrative, inevitable, unavoidable, impossible to stay away and sane from; or, rather, possible but at a high cost. To which extent is he personally evil and rotten, and to which is he a product and embodiment of stronger forces, nothing but a servant of a much more powerful Machinery? Who is, actually, that Tartuffe?

Using the Molière’s magnificent comedy which ruthlessly exposes social hypocrisy as a starting point, the director Igor Vuk Torbica creates a truly superb, precise, straightforward and painfully contemporary performance. It exposes all of us in an uncompromising manner, our frail morale, irresponsible gullibility, our acceptance of an unacceptable way of life.

Not a single wrong step in directing, acting, music, stage design, not a moment of boredom, banality, daily politics, arrogance, carelessness. Every single element is measured.

Infused with wittiness, this artistically powerful and utterly relevant performance, highly aestheticized and yet very appealing, this performance is a first-rate theatre experience.

Tartuffe represents a serious threat, more serious than hypocrisy, he’s an almost demonic occurrence which doesn’t appear unexpectedly and solves nothing, apart from the “misery” of his own self and the togetherness. Between the lines, he is omnipresent, he is on TV, all over newspapers, in our homes, in our lives that are getting completely void of essentially relevant content.

Based on:
Molière’s Tartuffe 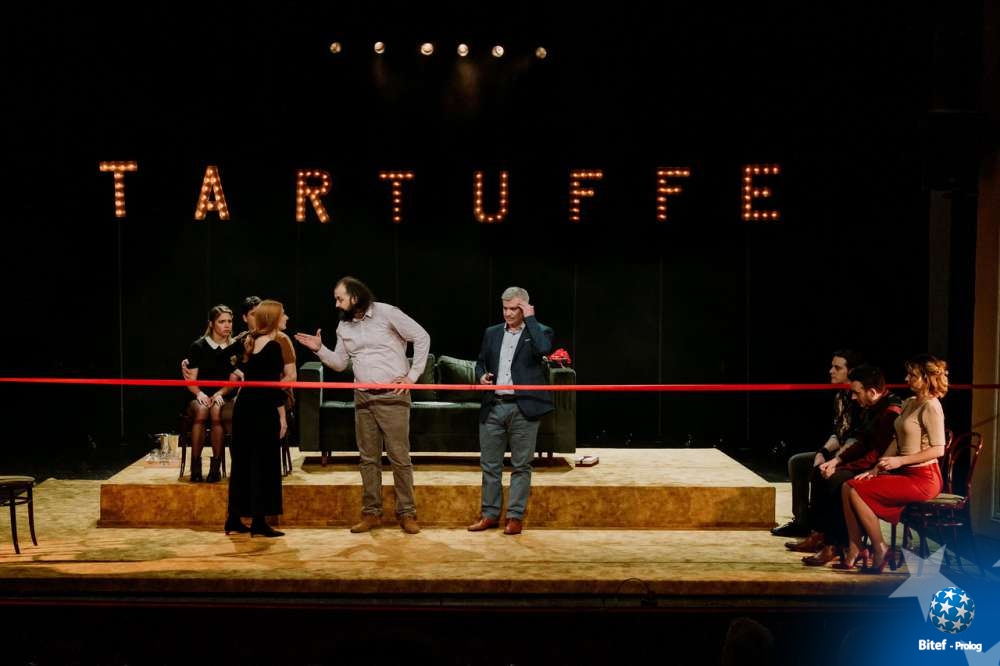 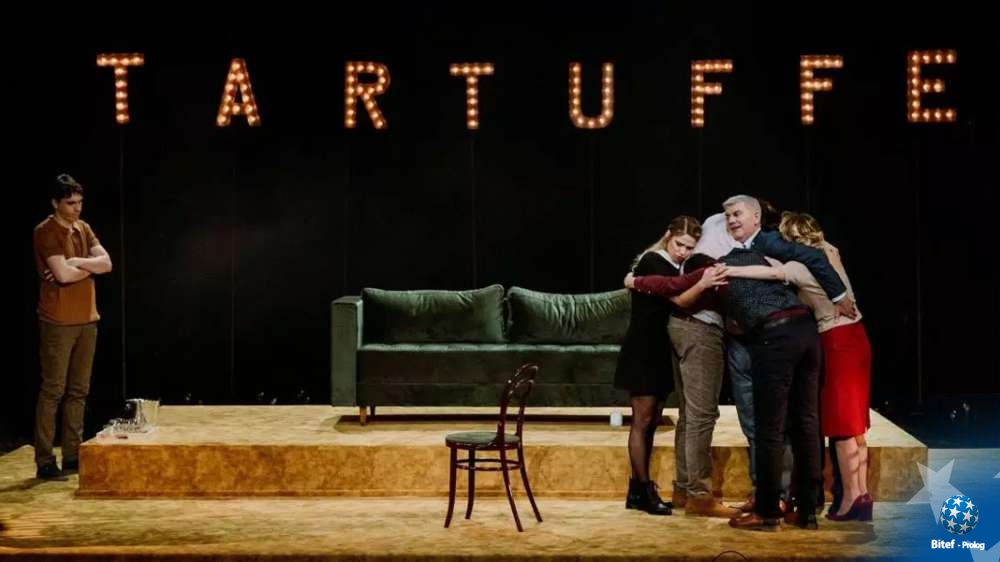 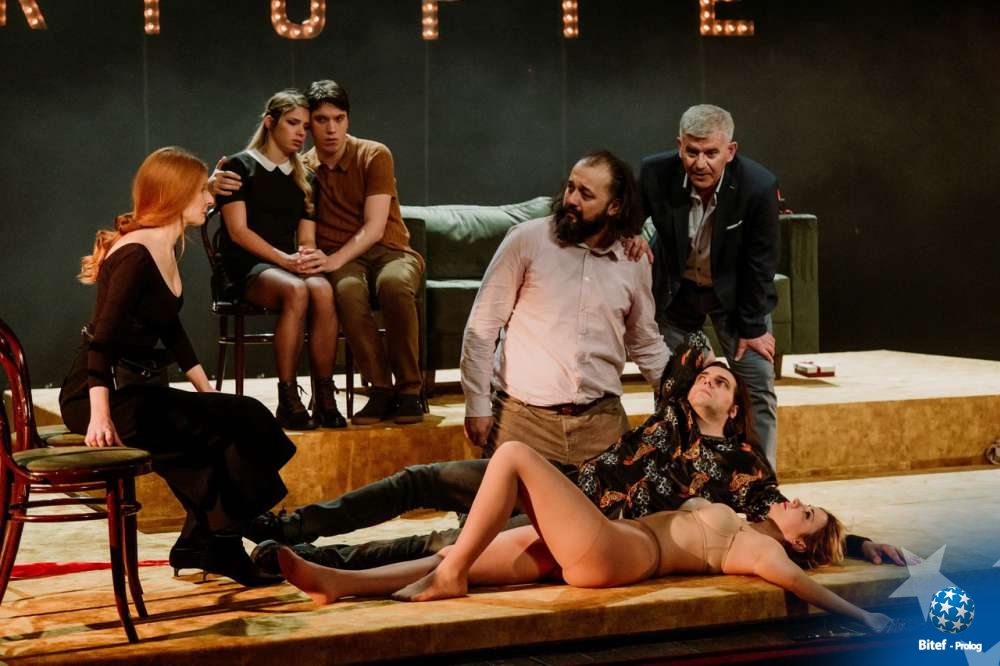 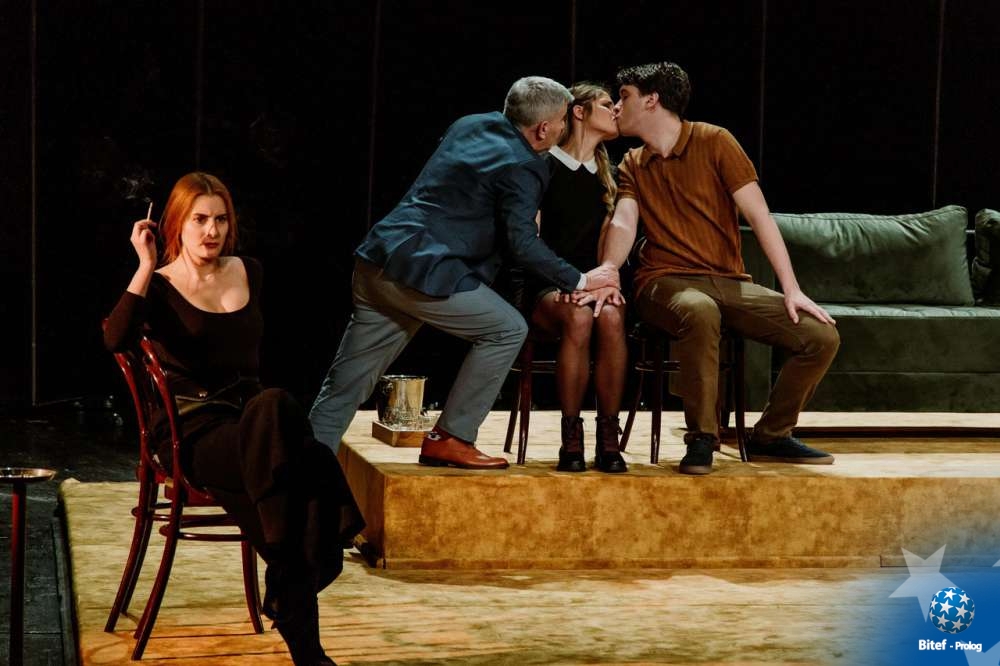 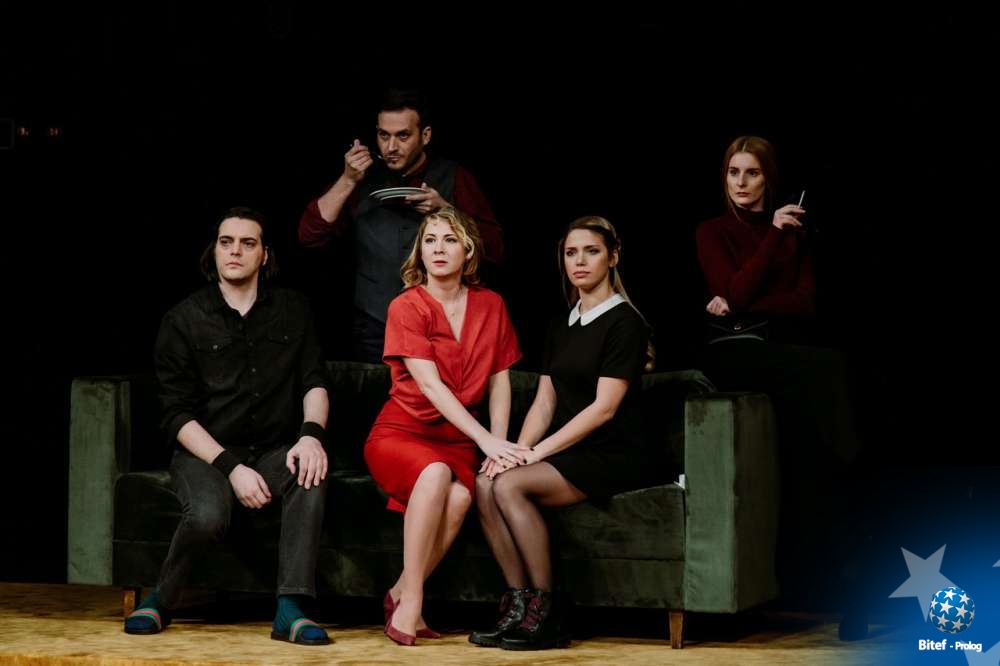